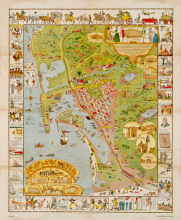 In the Museum’s permanent exhibition are maps ranging from a copy of the 1472 “T-O” Map by Isadore of Seville, generally considered to be the first printed map, to a delightful colored 1958 Tourist Map of Southern California with the charming name of “Roads to Romance."

The Museum’s main hall is divided into sections that show maps categorized by Exploration, Colonization, California as an Island and Sea Charts. There are also galleries set aside for maps of Europe, Celestial, Holy Land, Africa and Asia. Display cases in both the main hall and galleries contain many rare atlases by Blaeu, Ortelius, De Wit and others. Here too can be found work by Father Kino, Benjamin Franklin, a beautiful edition of the “Nuremberg Chronicles” and colorful Gold Rush Map by William Jackson.

In the “Green Room” Gallery is an eclectic mix of maps ranging from a rare manuscript map of New England by John Thornton to a large 1946 California Wine map by Ruth Taylor White. Here also can be found early real estate maps of San Diego and five "Belgian Lions".

The “Purple Room” Gallery highlights maps of Europe, the Heavens and the Holy Land. Here is found work by Andreas Cellarius as well as a remarkable birds-eye-view of the “Eastern Mediterranean” by Bernhard Breydenbach which centers on and highlights the Holy City of Jerusalem.

The “Yellow Room” is devoted to maps of Africa and Asia. Among the Asia maps are five done on Ptolemaic projections including Lorenz Friez’s 1535 untitled map of China and Japan. Here too is the stunning 1724 black and white engraved map by Francais Valentyn, “ Niewuwe Carte van…Japan” which is based on Valentyn’s service with the Dutch East India Company and shows the route from Nagasaki to Edo.

Among the Museum’s rarer holdings is the 1493 Basel edition of the “Columbus Letter”. This 2nd Edition is the only one to have a map in it. The Museum’s example is one of four known. There is also the 1816 1st edition of John Melish’s map of the United States. The 1625 Briggs map that shows California as an Island ( and was the map that arguably started the whole business) is also here.

The author list of the maps on display---Ortelius, Hondius, Munster, Blaeu, Mercator, Melish, Sanson, DeFer, DeWit, Cellarius, Moll, DeJode, Speed, Mortier and Van de Aa to mention only a fraction---reads like a “ who’s who” of cartography from the 15th to the mid-20th Century.